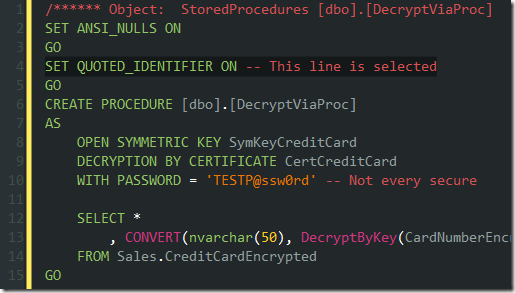 As before, it’s based on a combination of Solarized and Son of Obsidian.  The most visible change from the 2008 version is the highlighting – Visual Studio 2010 uses transparency for highlighting text, which looks rather bad when  combined with my previous dark yellow colour. I’ve set it to black for now, which doesn’t look too bad. This plugin will apparently fix the transparency, but I haven’t tried as yet.

You can download the settings file from here (rename to remove the .txt extension from the file), and use the Tools –> Import and Export Settings menu in Management Studio. This also allows you to take a backup of your current settings, or revert back to defaults.

If you enjoy the settings, or have any suggestions, please let me know! I’m still using SSMS 2008 as my main IDE, so this version isn’t quite as well tested yet.

If you’re not a fan, or you’d like to enjoy other colour schemes for Visual Studio 2010, check out studiostyles (although many of the styles won’t be specifically set up for the SQL* elements in Fonts and Colors, so you may have to do some editing).

9 Responses to “Beautify Your Management Studio (2012)”